How lucky can I be that I'm not having to play The Dating Game?
Ladies, you can count yourself lucky also.

P.S. Thanks, Diane, for thinking of me when you saw this.
It's perfect!
Posted by Don Madden 1 comment:

Into The Age of Darkness 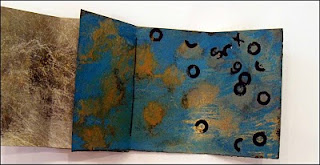 For the record, it's not always about me.
Susan speaks:
I took a class from Jill Berry called "Into The Age of Darkness".  I love dark colors so this class was a match made in heaven for me. 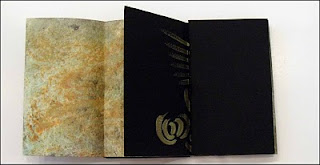 The focus was to experiment with many different paints and tools on black paper, specifically Arches Text Wove. She brought a lot of supplies so we could test all sorts of stuff and do plenty of what-if with everything. 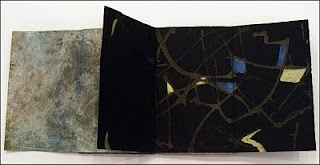 When we were finished we made a continuous four-part pamphlet book of our papers, with painted Tyvek for each part's signature cover. 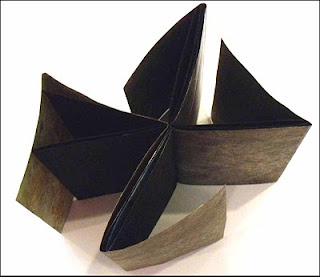 A bonus was using one of our papers for a slipcase for our book. 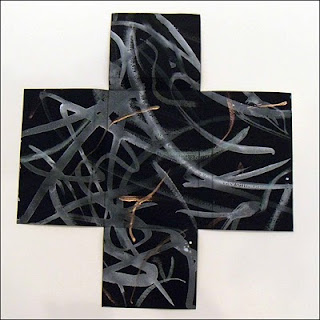 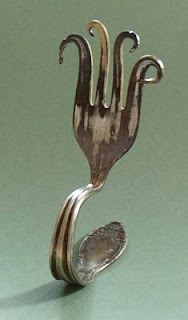 This was the last thing I did in my jewelry class. Every spoon needs a fork for a dancing partner but the knife is just going to have to sit this one out.

I'm very carefully not planning or paying any attention to what will happen in one month, despite Susan's gentle nudging and placement of art books next to my chair. The last week of August is when my Artist's Conundrum is going to smack me right between the eyes:


What am I going to do for the next 4 months?
I'm enrolled in a ceramics class so I'll have access to a kiln. I have the tools to do jewelry at home.

What should my focus be?
Ceramics?
Or Jewelery?
Or, more appropriately,
Clay Sculpture?
Or Metal Art?

What I really want to do is combine the two but I'm just not sure how right now.  I'm having trouble visualizing work that includes both. 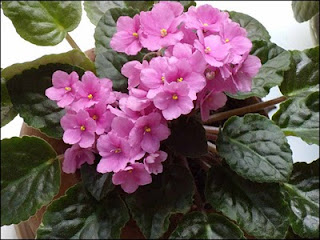 Earlier this month Seth had us all doing Buried Treasure and my entry referenced the fact that pink and girly stuff just didn't fit into my Scheme of Things. I got Comments and emails where everyone told me it was OK to not "do pink", in fact a lot of women told me they didn't "do pink" at all.


Confession time:
Sometimes I do pink.
Specifically, I have pink African Violets.
Susan won't even touch them and rolls her eyes everytime I start watering or trimming them. Then she'll say, "Please, please, don't tell anyone I know that you keep African Violets. Those are Granny plants!"

I have one pink, one purple, and one white plant. I've actually had five but I've given two away in the last year. They love me! I have abandoned them for over 28 days while on vacation and (much to Susan's dismay) they were still alive when I got home. They have survived my over and under watering, my attempt to feed them compost (that made lots of gnats!) and erratic air conditioning and heat. I may have to give them names.
Posted by Don Madden 2 comments: 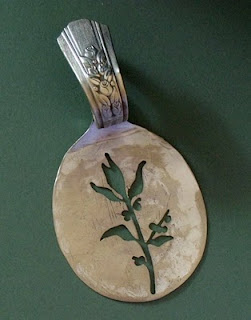 Yes! I am The Sawing Man!
School is over and I can out-saw Paul Bunyan. For the spoon above I first flattened the bowl and then did the sawing. I'm not sure what I'll do with it but the handle will be cut off and may be used for something else, even though it does seem to sort of match the cut-out.

If I cut these pieces (below) out with a circular shape they could be earrings but I'll probably dome them and used them in something else. "Something Else" means I have no idea at the time and may never come up with anything but at least the intent was momentarily there. 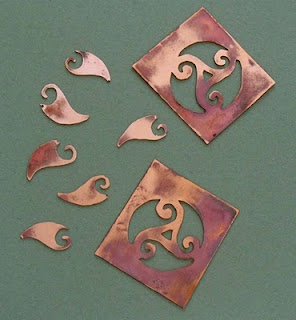 Sawing and Piercing a Diet Spoon

My jewelry instructor, Bill Evans, has gently tried to convince me it is called "piercing" by those who are skilled at it. Therefore, I, definitely not skilled, will continue to refer to it as "sawing".

Go here and here to see my inspiration for this spoon. I've got a lot of practicing to do. 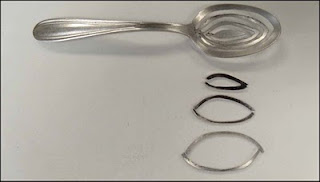 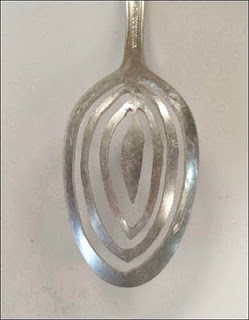 Want to lose weight? Try my new and improved guaranteed weight-loss Diet Spoon.
No? Then how about a rice salad that I (yes, me) make? Which is for dinner tonight, along with pan-fried tilapia for me and a crabcake for Susan. 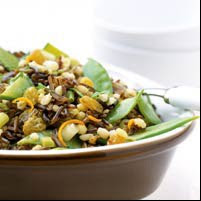 This recipe is an old one we've used for years but the only place we could find it for you on the internet was here. Sometimes we add sauteed mushrooms and almonds that have a special name but I'm not sure what it is - sliced? slivered?

Susan, The Blog Wrangler, speaks: Today Janis told me that this blog has been pretty thin lately. She's absolutely right. However, in my defense I'll have to point out that her blog is totally non-existent. And it's the summer. And I'm lazy. I'd like to promise I'll do better but that sounds like too much work.
Posted by Don Madden 3 comments:

Seth has started up another Buried Treasure online collaboration. Go here to see what I'm talking about and, while you are there, take a few hours to browse through his blog and see some of his incredibly creative work. And take a look at the great collaborations he has done in the past. Maybe you'll need more than a few hours...

I asked Susan to help me pick an older post ("buried treasure") that new readers might find interesting.  She thought it was only fair that you get a little more insight into both me and and a special friend who is, as I have just said, incredibly creative. 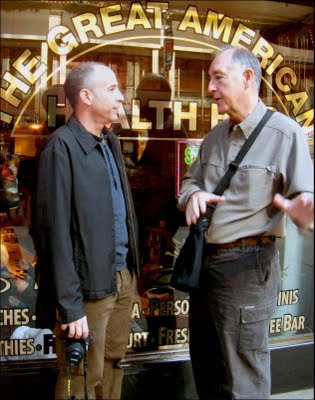 Sometimes it seems like a lot of mixed-media artists who blog do a lot of ... pink. Girly stuff. Pretty stuff. Feminine stuff. I think it's because a lot of them are women and pink stuff comes more naturally to women than men. I'm not being sexist here, I'm just making an observation. And it seems like a lot more women than men have blogs where they talk about the process of making art.


When I go to art workshops I'm usually the only guy in the class. Wait! I'm NOT complaining -- being one of only 10 men in a group of 400 people is a very nice situation to be in.
[Susan speaks:

Trust me on this fact: No one ever says to Don, "Oh, you're Susan's husband."

Does this bother me? Not in the least. The man is so oblivious to predators that he had to ask me if a woman inviting him to her room for a drink after class was coming on to him.]

About a year ago Susan made a connection with a woman via this blog. They started out as strangers exchanging email about something they found in common only to find out that they had a lot in common and they now refer to themselves as Evil Twins Separated at Birth. When we were in New York City last spring we met up with her, and she and Susan and I all felt as though we'd known each other forever. The two of them are very much alike and yet very different and I had fun watching them interact with each other.
This time in New York City we met up with an artist we'd connected with via this blog. He was an artist who understood what I meant when I talked about the "pink" stuff. A guy! A guy who makes art! We talked about metal and rust and dirty, worn stuff and it was easy to talk to him, as though we'd known each other a long time. It was a very, very nice connection.
[Susan speaks: It was cool. He is very much like Don -- a gentle, grounded soul. The two of them are very much alike just as they are very different and I was delighted that Don found someone he could talk to. They are in the picture above.
As for the pink, feminine stuff.... I had to remind Don that although he may call his ceramic pieces "dudes", they could also be considered dolls. So now, once again, he is fully flummoxed.] 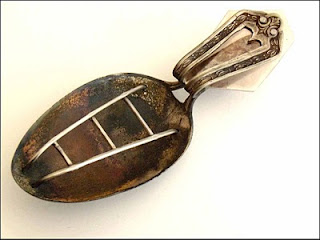 I'm still working with spoons. Check out the photo below - sometimes I like the effect of soldering that shows up on the back better than I like the front. Susan suggested putting a little piece of mica under the handle and I think that made the piece perfect. 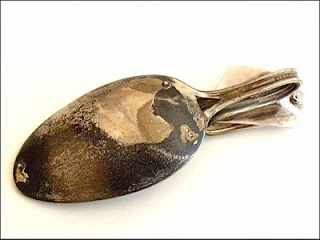 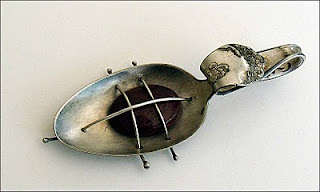 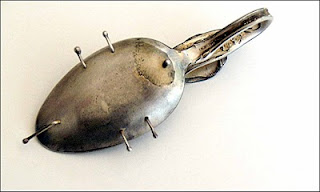 Remember Uri Geller? He was a paranormalist who used his mind to bend spoons. And I used Wikipedia to find out what a paranormalist was.
Anyway, I bend spoons, but not with my mind., although I do a lot of thinking about what the design will be.  The interesting part is how the back of the spoon looks after I've soldered on it, like the one above. The one below was the first one I did. No clay this summer, all jewelry class instead. 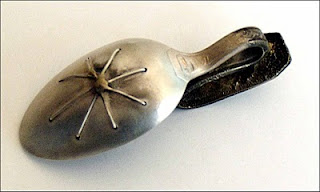 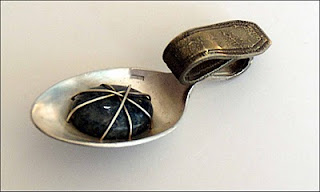 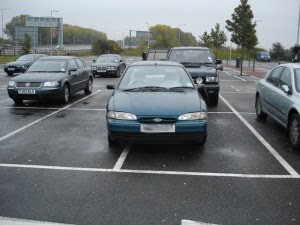 I'm finding this to be a really appropriate definition:


Prozac Parking:  Anywhere but between the lines.
Posted by Don Madden 1 comment: 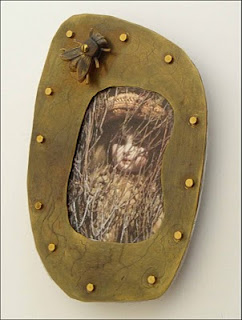 A lot of May was spent traveling and taking art classes. July snuck up on us because somewhere along the way we lost most of June to intertia.  My Blog Wrangler has been having fits about her new computer's new operating system and new version of Internet Explorer and new version of Blogger for her to cope with. Not to mention the many programs she has had to re-download that have resulted in her getting a newer version of the program that she now hates because a lot of her favorite features have disappeared.  All of this makes me dare not even think of asking, "How's my blog doing?"

One class I took was from Thomas Mann, a very talented and prolific artist. This is my first attempt at making a complex (for me) piece that is a "sandwich" brooch, about 3½ inches high. There is plexiglass in between the pieces of metal and lots of very small bolts holding it together. By small I mean that each bolt is almost less than the thickness of pencil lead. I'm getting much better at sawing curved edges.

The little doodad on the top is just something I pulled out of my junk box. I thought it was a bee but someone told me it was a fly. My response is one that usually makes me grit my teeth when I hear someone say it but it is appropriate here:  Whatever.

Below is a picture of some of his sample pieces that Thomas brought to class. I can only get better. I hope. 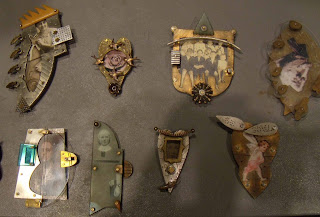 Remembering on the 4th of July 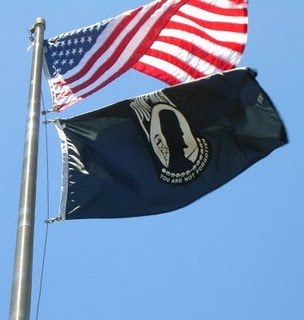 On the 4th of July it's easy to recognize our flag and wave it proudly at parades and picnics. Just in case you don't remember, the second flag here is the POW-MIA flag. There are now 1,714 veterans listed by our Department of Defense as missing and unaccounted for from the Vietnam War.

I've talked about this and about being in Vietnam (here and here) in the past. It still saddens me to think that James Clifford McKittrick's family is still waiting for him.
The 4th of July is our Independence Day, when we celebrate our 1776 Declaration of Independence, which includes this statement:
We hold these truths to be self-evident, that all men are created equal, that they are endowed by their Creator with certain unalienable Rights, that among these are Life, Liberty and the pursuit of Happiness.

Don't forget the men and women in our Armed Forces who are making sure you have those unalienable Rights. 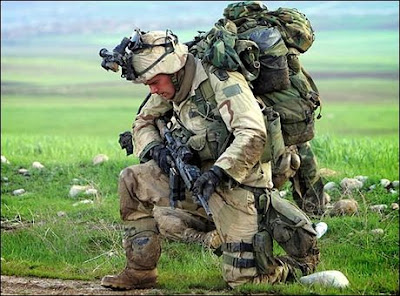