Give-Aways and The Ghostbikes 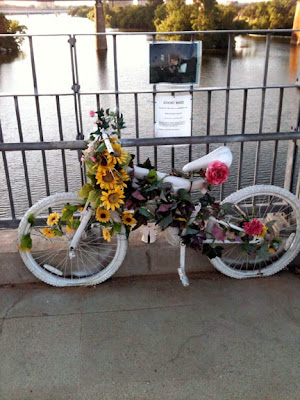 This is a Ghostbike. You can see a documentary about them here. This is our pedestrian/bicycle bridge spanning Lady Bird Lake, recently named after the wife of the former President. He had a lake named after him, Lake Lyndon B. Johnson but everyone calls it Lake LBJ. So why didn't we call this Lake Lady Bird?  There's no good reason for that weirdness but anyway it used to be called Town Lake because it divided the town. Duh.
Moving along folks, it's not exactly a lake, it's the Colorado River.  Pay attention, boys and girls, because this will be on your final exam:   The Colorado River is the 18th longest river in the United States and the longest river with both its start and ending within Texas. If you put dams on it you create reservoirs and then you can call all those places lakes.  Austin big-wigs can call it whatever they want but us long-time Austinites still call it Town Lake and EVERYONE refers to living south/north of "the river" or "crossing the river".﻿
Back to the Ghostbike: Here's a close-up and the weird thing is that when I placed the Sweater Child (Remember them? Go here if you forgot.)down there I had the front (opening) facing away from the bike. Someone picked it up and turned it around. It's been there for over two weeks now. 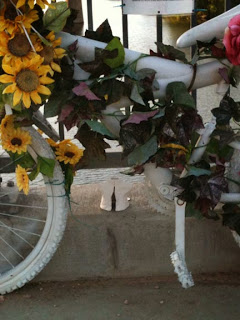 Here's another Ghostbike I found in Austin: 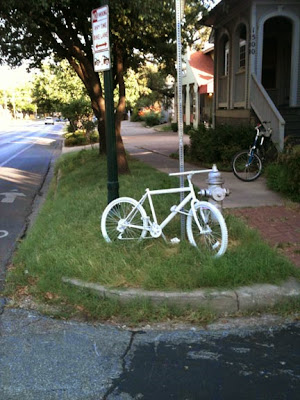 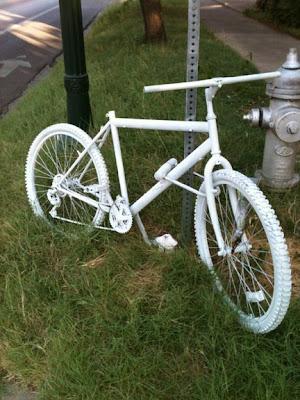 Is there a reason why sometimes I can take a great close-up with my iPhone but most of the time my pictures are lousy looking? Susan told me that for a change she didn't have to do any tweaking at all of the photo except to reduce the size for the blog. Go figure. 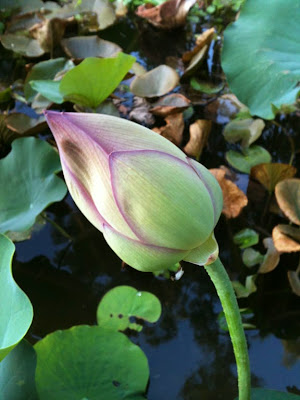 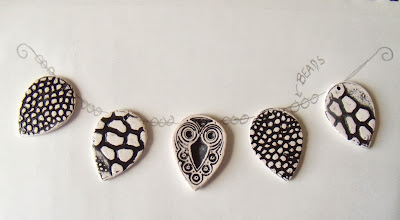 A drawing with some ceramic pieces put in place -- I have good intentions but ...


... as my To-Do list shows, these pieces aren't even on it. And nothing much has been done on the list. I don't even remember why there is a big W at the top.

To make matters worse, most of the supply drawers still don't have anything but temporary blue tape labels on them. 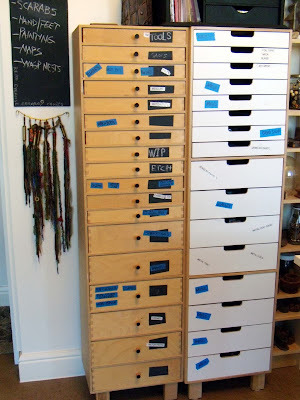 These pieces are all about 1". Susan reminded me that the round ones would have made nice buttons if I had remembered to put some holes in them. Here's a tip: Neutral shoe polish will give those white sort-of buttons a nice glow. 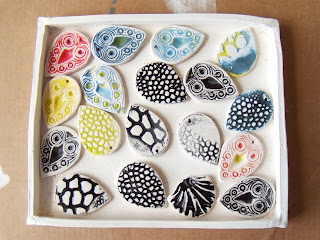 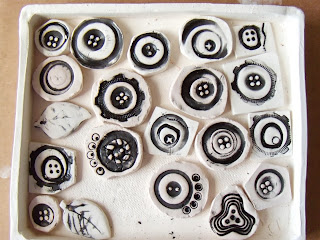 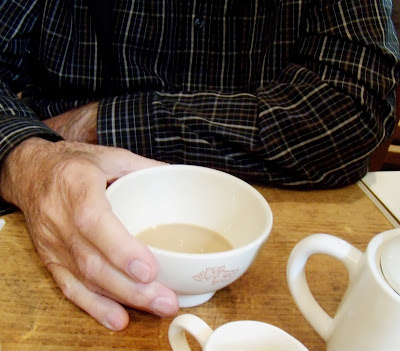 I
do
not
get it.
I don't even remembering it being like this in Paris, France, where I have had coffee in a cafe.

Let's talk about food for a change. Food is a topic close to my heart and the clear proof of closeness is quite visible above my belt buckle, regardless of how hard my Spinning workout class is.

Shown above is how I was served a cup of coffee at Le Pain Quotidien cafe in New York City this spring. What?? Where is the handle? Why am I getting coffee in a soup bowl??? The waiter was very snooty about my request for a regular coffee cup ("Sorry, no, never.") until he very astutely figured out we were tourists and asked (snootily) where we were from.  Somehow mentioning Austin, Texas, breaks down that Snoot barrier and, of course, he knew someone there and knew people who were planning to move to Austin and so on.  (Please don't! We have enough traffic problems and we are running out of water!)  But I still couldn't convince him to find me a coffee cup.

Usually I drink my coffee black but when I share with Susan it gets creamed up.  Lunch was interesting - I expected my sandwich to show up on a plate but when the coffee came in a bowl .... 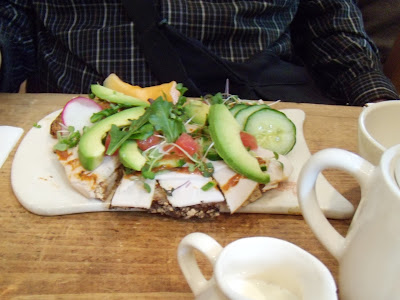 Susan really liked her chicken curry sandwich with the cranberry chutney and told me to stop fussing about the coffee because the best dessert in the world is the Belgian Brownie from Le Pain Quotidien. She tries to stay vegetarian but sometimes she backslides and this time it was worth it because she'll figure out a way to use cranberry chutney on something vegetarian. 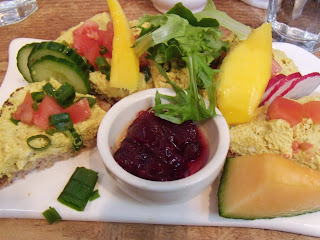 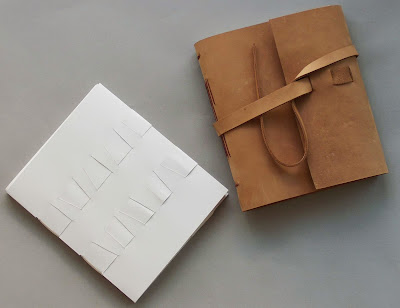 Sort of. Actually I'm taking a class to learn how to make my own sketchbooks. That makes me a Bookmaker!  The white one is a strap book, the straps can come off and the cover lifts off and you can replace the block of white pages with fresh ones. The leather book is very manly. That's politely saying it looks like a Guy book. 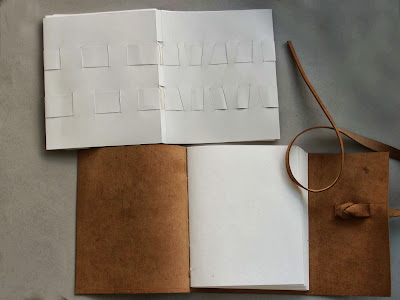 We were in Houston recently and got some good shots of the building next to the Contemporary Craft Museum. 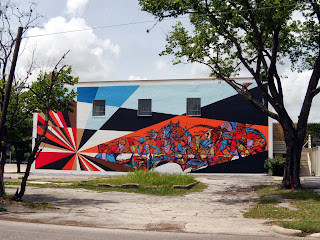 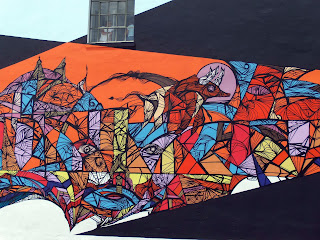 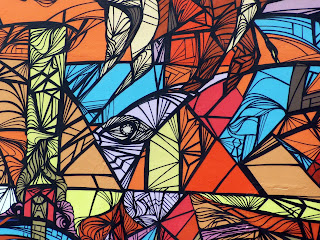 While we were there, Susan defied death once more by stopping in the middle of an intersection to take a picture of a Graffiti Man she spotted.  Her technique is to stop suddenly and yell at me "Tell me when the traffic starts up!" and then ignore me while she takes her picture. 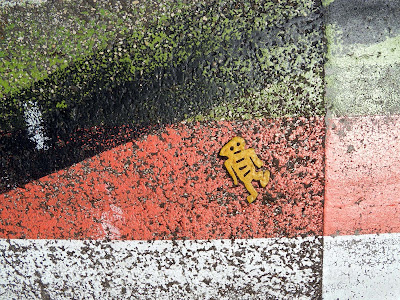 If you use Google Earth she said you can go here to see where she took the picture:
Latitude 29°43'32.55"N and  Longitude 95°23'22.84"W
I have no idea how to figure these out but I've been watching The Bridge on FX (pretty good but not as good as The Americans) and some brainy young kid knew exactly what numbers like that meant. 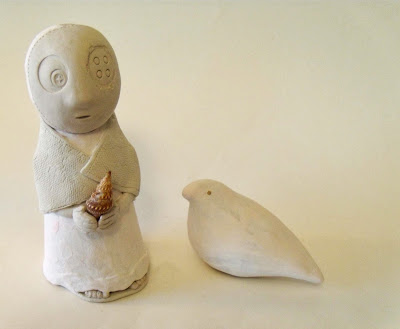 This little Dude doesn't really look that cold and frozen, it's just the photo. He's a work in progress but he told me he wanted to hold one of my snail shells.

Speaking of cold, which is a nice thing to do as we heat up to over 100 degrees in the afternoons, right now I'm reading the book Frozen in Time. It's about a cargo plane that crash-landed in Greenland in 1942 and the subsequent search-and-rescue mission.  When I was in Vietnam I was with the 37th AARS.  AARS stands for Aerospace Rescue and Recovery Squadron and our helicopters were referred to as "Jolly Green Giants"  because they had a large dark green frame. 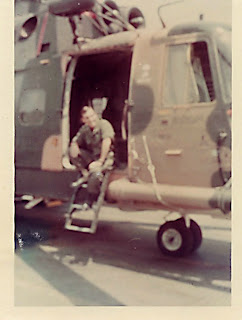 Here's your latest Netflix recommendation: Silver Linings Playbook, a 5-star movie.  Jennifer Lawrence is a powerful actress, pretty good in The Hunger Games, incredible in Winter's Bone and totally awesome in this one. (Did I really just use the word "awesome"?!!!)

Susan is a big fan of the AMC-TV show The Killing and thinks Joel Kinnaman is a great actor who is being ignored.  He hasn't done many movies but one available on Netflix was Easy Money so we watched it. He is great.

The latest Sweater Child give-away was at the Turtle Pond at the University of Texas here in Austin. It disappeared within a week. 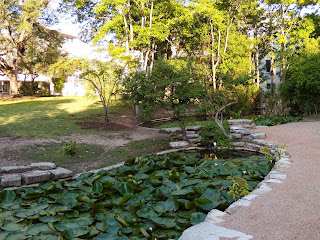 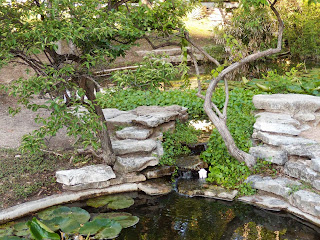 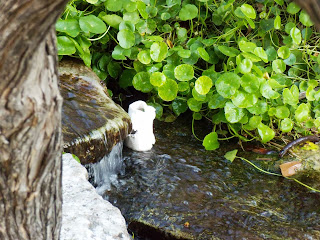 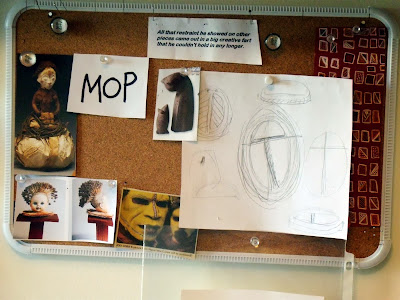 My bulletin board.  Susan started the drawing for me. After working with clay I need to mop up my floor so my Swiffer mop and I have become close friends. 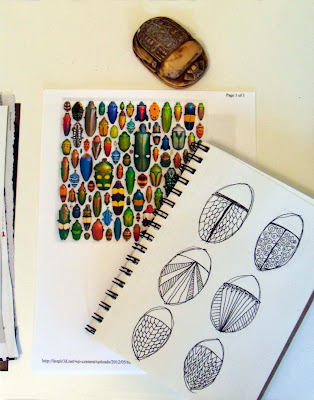 The scarab came from a souvenir shop at some museum somewhere. The colored picture was pulled off the internet - a calendar page from Christopher Marley.  Several years in a row I gave Susan his calendar and she always saved them... until we had to downsize.  She'll get a new one this Christmas and we'll keep it!  The drawings are my first ideas about making ceramic scarabs.  Or beetle-bugs.

Where did the idea to veer off into making scarab beetles come from? 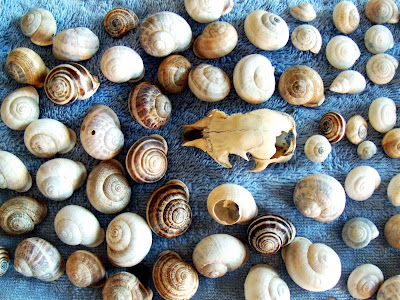 There is an odd area near a creek bed where I walk in my neighborhood. These snail shells were gathered up there over the the past few months. I make sure they are empty when gathering them (obviously!) and soak them in bleach water and clean them out with a q-tip.  The skull is ??? A large rat? A squirrel? A raccoon? So my brain jumped from shells to scarabs and that brings me back to my bulletin board where the quote at the top is this:

All that restraint he showed on other pieces
came out in a big creative fart that
he couldn't hold in any longer. 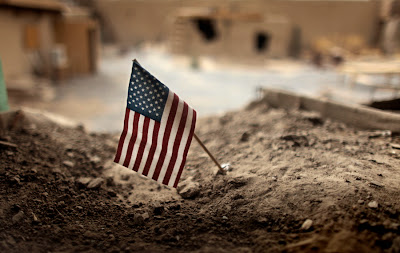 We declared our independence on July 4th, 1776, and the red, white and blue stars and stripes entered into our lives on our flag.   Flags and ribbons and all sorts of stuff (what the heck is bunting?) in red, white and blue are everywhere and the fireworks displays on the 4th will include a lot of those colors.

For the record, the picture above is from an area near Kandahar in Afghanistan. That little flag is the same kind children wave at veterans marching in our parades on Independence Day. It is strange for me to believe that we have had armed forces in Afghanistan for over 11 years. Give them a thought as you celebrate our holiday. And give them another thought the next time you vote.

Here's a give-away that is still in place after nearly a month. The pillar is on one of our busiest streets and the city has carefully preserved the painting there instead of covering it up. 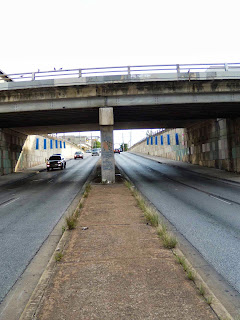 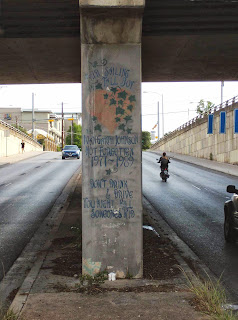 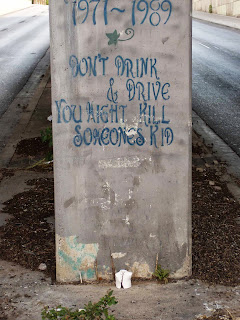 The blue panels in the background on the right and left side are reflective and some people mistake them for traffic signals. Actually it is a collective work of art called "Moments" by Carl Trominski and was created for the Austin Art in Public Places project on 2003.

Have a safe and happy 4th of July.

P.S. Yes, this is a little early. But at least my Blog Wrangler is doing something for me.